Ingrained in Louisville’s rich history for decades, SDF has been making impacts on the community for the betterment of the Metro area.

An aerial survey during the 1937 flood pointed to an unaffected area that had the potential to be the home of a new airport. This survey showed a large, dry area of land, which was later to become Standiford Field. (The airport was named for Dr. Elisha David Standiford who, as a businessman and legislator, played an important role in Louisville transportation history and owned part of the land on which the airport was built.)

In 1941, the U.S. Army Corp of Engineers built one, 4,000-foot, north-south runway. However, the War Department delayed turning over the new airport to the community until the conclusion of World War II, as it was an integral part of both airfield operations and aircraft manufacturing. In fact, Curtiss-Wright and Consolidated Vultee both built aircraft for the War Department at Standiford Field during the war. Then, in 1947, the Federal Government turned the airport over to the Air Board, at which time all commercial flights moved to Standiford Field from Bowman Field.

Standiford Field opened for passenger business on November 15, 1947. Three airlines – American, Eastern, and TWA – were then handling more than 1,300 passengers a week. The old Consolidated Vultee cafeteria on the airport was used as a temporary terminal. For the first 2 ½ years, the airlines operated out of a World War II vintage barracks on the east side of the field. Growing pains led to the construction of Lee Terminal, a new $1 million facility that opened on May 25, 1950, with 42,400 square feet of space, sufficient to handle 150,000 passengers annually. That terminal was named for Addison Lee, Jr., Airport Authority Chairman from 1929 to 1949. Six gates were included in the new terminal. The parking lot contained space for 300 vehicles. In the mid-to-late 1950s, two interior concourses replaced fenced, open-air gate positions. In all, air terminal space was increased to 114,420 square feet. 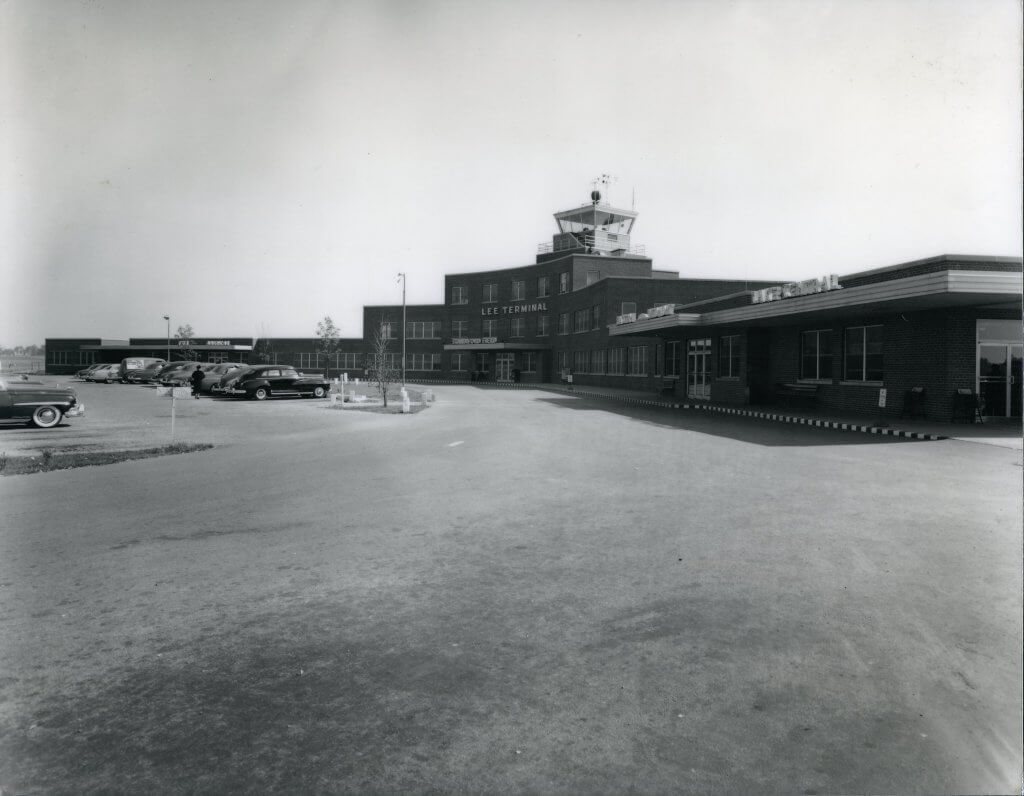 Boarding at Standiford Field increased from 600,000 a year in 1965 to almost a million in 1970. Due to this increase in passenger activity, 1970 and 1971 brought new construction and an expansion of the terminal. The main lobby was extended; a concourse housing USAir facilities was completed; and a 33,000-square-foot Delta Air Lines concourse was built. In addition, ramps serving the USAir and Delta concourses were constructed. The Federal Aviation Administration moved into the second control tower on Derby Day 1971. The parking lot was increased to 2,000 spaces and major airfield improvements were made.

Construction of the new landside terminal began in May 1983, with the terminal opening June 30, 1985. The modern facility replaced a terminal building first constructed in the late 1940s that was originally designed to accommodate 150,000 annual passengers. In 1985, nearly two million passengers arrived and departed Louisville via scheduled airline service. The entire landside terminal project cost approximately $35 million.

Just as Bowman Field outgrew itself in the late 1930s, so did Standiford Field in the late 1980s. As a result, the Airport Authority announced an ambitious expansion plan in 1988 called the Louisville Airport Improvement Program (LAIP). In essence, the plans called for building a new airport atop the existing one, all the while continually and safely operating the airfield.

In 1988, after reviewing more than two dozen alternative proposals, the Airport Authority Board chose to expand Standiford Field (now Louisville Muhammad Ali International Airport) and build an entirely new airfield on top of the one built in the 1940s.

However, it was clear that changes needed to be made and solutions found for the people living around the airport. As a result, the community embarked upon one of the largest aircraft-noise residential acquisition and relocation programs ever carried out in the United States. Under the Louisville Airport Improvement Program (LAIP) and the Voluntary Residential Relocation Program, the community is engaged in relocating 3,740 families.

In 1991, the Federal Aviation Administration (FAA) approved the expansion of Louisville Muhammad Ali International Airport as part of the Louisville Airport Improvement Program, which included the relocation of more than 4,000 people in 1,581 homes in Standiford, Prestonia, Highland Park and Tuberose, as well as 150 businesses on 100 business properties. Also at that time, the Airport Authority gave 136 homeowners in Edgewood an opportunity to participate in what became the Voluntary Residential Relocation Program.

In 1994, the focus switched from an airport-expansion and noise-related relocation program to only a noise-related relocation program under the FAA Part 150 Program. Under that program, people living within the airport’s 65 DNL (day-night average sound level) were eligible for relocation. The FAA approved the program in 1994 to initially include the relocation of another 673 families in Ashton Adair and Edgewood. In 1995, the Airport Authority requested (and approval was granted) to change its focus from sound insulation to acquisitions in the Minors Lane area, which extended the relocation to an additional 1,064 families.

In 1997, the FAA approved expansion of the program to an additional 286 families in the balance of Edgewood and the neighborhoods along Preston Highway, bringing the total to 2,159 homes approved for acquisition in the Voluntary Residential Relocation Program.

The success in relocating families from noise-impacted areas created its own problems. By reducing the number of comparable homes in the local real estate market available for the airport-area families, fewer homes were available to buy and the price of homes in that price category rose faster than other homes in the market. Without a way to create comparable replacement housing, the noise mitigation program would have been unable to relocate as many families.

Today, the Voluntary Residential Relocation Program has two distinct components, the traditional purchase program and the Heritage Creek Program. In either case, families are offered an opportunity to move from their noise-affected homes. Vacated homes are then demolished.

For more information about the Authority’s Voluntary Residential Relocation Program, contact the Airport Relocation Office at (502) 368-9833.

Reuse of Land a Success

The land acquired for airport expansion is being reused to the airport’s, the city’s and the state’s benefit.
Full story Detailed map 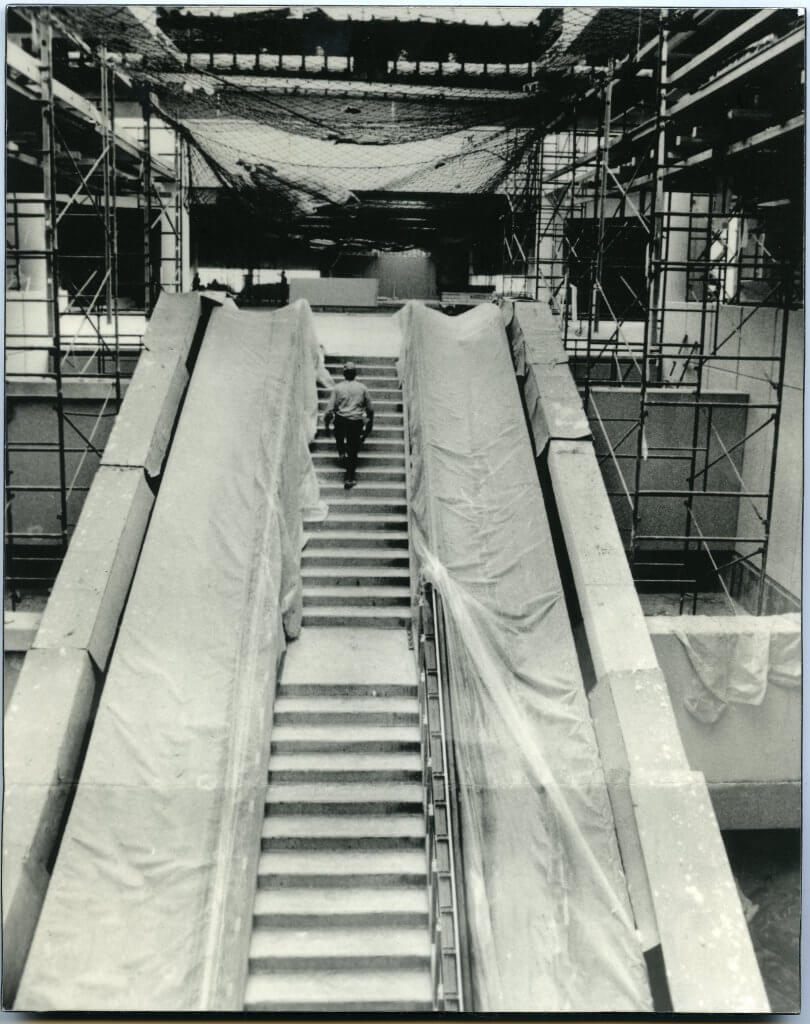 Increased passenger activity, its ranking as a major international air cargo airport and the Airport Authority’s vision for the future, drove a name change for Standiford Field in 1995 to Louisville International Airport.

In 2019, the airport was renamed Louisville Muhammad Ali International Airport.

In May 2006, UPS announced a $1 billion expansion that will increase sorting capacity over the next five years and create more than 5,000 additional jobs.

In 2009, UPS completed the first phase of a second $1 billion expansion of its Worldport global air hub, which allows the facility to handle up to 1.1 million packages during its busy, late-night sorting shift.